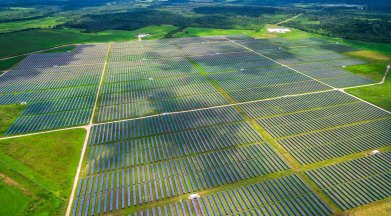 In 2017, large-scale renewable power generation has all but made the successful jump from an innovative novelty to a viable industry. In many places, a kilowatt-hour of solar or wind is at parity with local grid prices or even cheaper, and experts predict that it won’t be long before this is the case everywhere.

Not to diminish that accomplishment - because it is absolutely incredible - but renewables are approaching the day when they’ll be as safely boring as other forms of power generation. Let’s face it: There are about as many children who want to grow up to run an electric substation as there are children who know that electric substations are a thing and what they do. Not a lot.

So instead, let’s focus on the fun ones for a day. Here are 4 innovative approaches to generating renewable power that you probably haven’t heard of yet.

Wind generates power and wind makes kites fly. At least one company has decided that these ideas deserve to go together. Makani’s Energy Kites, which are really winged, tethered drones, use a small amount of energy to climb to high altitudes and then glide in place while the strong winds at these heights spin their propellers. The propellers spin turbines, generating electricity that is sent back down through the tether.

Makani’s kites have the advantage of significantly lower costs for materials, installation, and maintenance, which makes sense considering that they are significantly smaller in size than a conventional wind turbine. They can also fly about twice as high as most wind turbines, where wind speeds are much higher. What is somewhat less clear is whether they can be operated in the same range of conditions or how long their useful life is. The potential for failure is also much scarier with an 11,000 kg winged drone.

The well-publicized failure of solar roadways has made the public rightly skeptical of the ‘solar everywhere’ trend. In general, solar performs best when it is only doing one thing. Energy startup Pristine Sun may have found the exception by floating solar panels on reservoirs, agricultural holding ponds, and wastewater treatment pools.

There are several advantages to this approach. First, the space being used by reservoirs is otherwise unused, making it extremely affordable, even near urban centers. This cuts down on overhead and on transmission losses, as urban centers also use most of the energy in the U.S. The panels benefit the reservoirs by slowing the process of evaporation, which is a major cause of water loss, especially in often drought-stricken California. Finally, the water helps to cool the panels, which brings them closer to their optimal operating temperature.

By now, everyone has heard about Tesla’s solar roof tiles. The company has been teasing the public for a few months now and recently began taking deposits. Rooftop solar has been an increasingly common feature of homes across the country for years now, but Tesla’s offer is unique in that the panels are designed to replace the roof instead of sitting on top of it. In keeping with this additional function, they are designed to look visually similar to roof tiles.

The first systems are slated to be installed in California this month before spreading to other areas. The mathematical realities of Tesla’s solar roof mean that it is currently in its “early adopters only” phase, however. Even with a $14,000 federal tax credit, a solar roof on a median home and a Tesla Powerwall battery come to about $39,400. Over the course of 30 years, the system would generate $38,100 on a home receiving the median amount of light, making it just shy of the break-even point. It is worth noting, though, that a home receiving more light could turn a profit and that the home may appreciate in value based on buyer sentiment.

When most people think of hydropower, they think of large dams that generate megawatts or even gigawatts of power. When Gravity Renewables thinks about hydro, it thinks about small, natural waterfalls that it can use to gather a much smaller, but still very real amount of electricity from. Better, by using waterfalls that are already in place, the company avoids the negative ecological impacts that larger hydro projects tend to cause.

Virtually all of the large-scale hydropower plants that can be sustained by U.S. waterways have already been built, but there are countless small waterways that could be tapped for incremental profits and electricity. These projects are possible under a system called remote net metering, which allows renewable projects to sell their electricity directly to large consumers directly instead of to the grid at wholesale prices. For obvious reasons, remote net metering is opposed by major grid companies and is only available in a few states, but if it were to catch on, more small hydropower projects could become viable across the country.

Most of the projects discussed here are specialized innovations that make the most sense in niche cases, not large, utility-scale projects. That’s how innovation works though. The next time a new, major innovation in renewable technology becomes available, it will be because of researchers and entrepreneurs who experimented in the weeds.