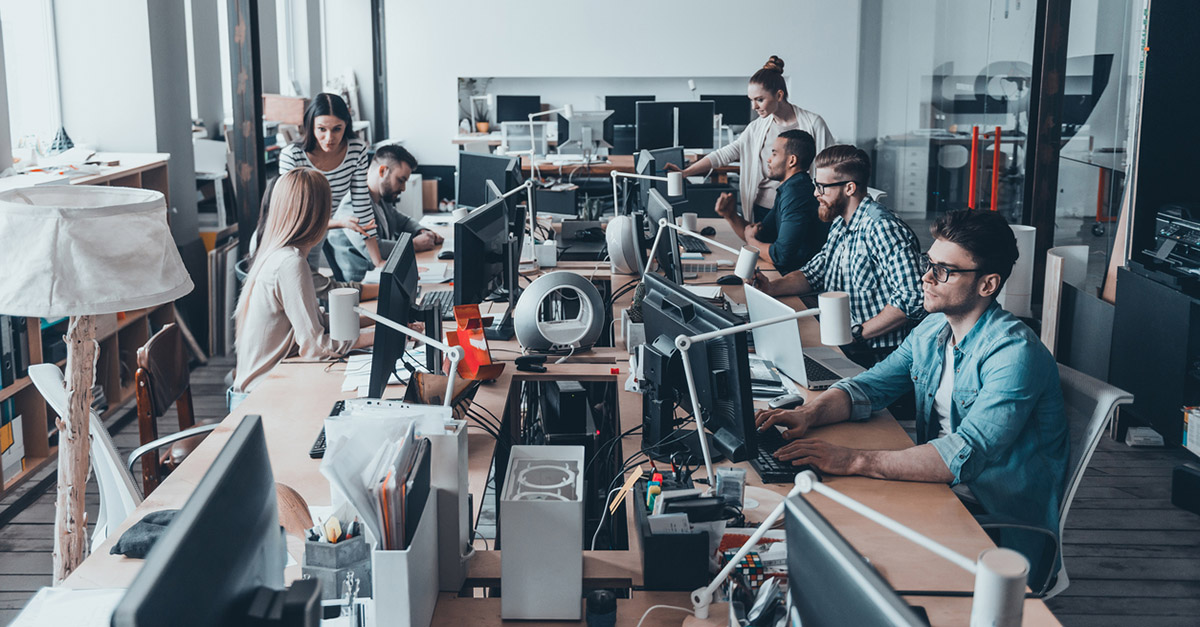 The productivity of workers in an office is a nebulous, difficult-to-pin-down figure that nevertheless has a profound impact on profitability. There is a long history of office design being used as a proxy for efficiency, because one can be controlled directly and the other can’t.

There’s no magic bullet for making an efficient office. Some teams function better in one setting, others in another. However, there are some common elements that make for an effective, well-oiled workforce.

Here are the six essential elements that office managers considering a change to the office should bear in mind:

The first and most fundamental element of an office plan is the layout type. Will your office be open plan or cubicle-based? Will you have private offices?

Most young companies choose open plans for fairly obvious reason: More desks can be fit in the same amount of space under this layout, communication and collaboration happen much faster, and there is evidence that it is more productive than traditional alternatives. However, diseases also spread more easily in an open office setting, and some employees report feeling stressed out by the lack of privacy.

As we wrote last month, cubicles were originally invented to create a more private, comfortable setting for employees to work in. The result was… not that. Even so, for older workforces that are used to a cubicle environment, transitioning to an open plan office might feel like a downgrade.

A final option is the mixed approach that is gaining popularity in cutting-edge offices. Under this layout, employees are generally given open plan desks - though they may not be strictly assigned - and additional space is provided for a variety of use cases. Couches might be available for discussions, private rooms for focus-intensive work, and social spaces for relaxing and less intensive work.

High-quality lighting can make a much bigger impact on worker productivity than most people expect. That’s partly because lighting fades into the background as an element of the office and is difficult to notice as long as nothing changes. However, poor lighting can be a slow but steady drain on office morale and efficiency.

In this area, going the extra mile often costs just a little bit more and produces striking results. High-powered, daylight color balanced lights will create a bright, energetic space that encourages productivity with the body’s natural cycle. Humans (and most animals) follow circadian rhythms based on light that tell them when to wake up and when to go to sleep. Working in a poorly-lit office can make employees drowsy because their bodies think that it’s time to go to sleep. A bright office that mimics the light outdoors has the opposite effect - it tells employees’ bodies that it’s time to wake up and be productive.

Some energy-conscious offices like to maintain a constant light level by adjusting their electric light to the level of ambient light coming in through windows. This requires light sensors and automated control of lighting fixtures - both more complicated than the standard fixture, but the energy savings generally pay for themselves quickly.

One relatively easy element to include is green space. We’ve written before about how greenery is a natural stress reducer, especially in the office. Including a few potted plants or a green wall isn’t that expensive, and it will help to make your employees happier and more comfortable. A more involved feature, like a green roof, will be more expensive, but may convey other benefits including cost reductions.

Why is green space especially good at reducing work stress? Working in an office requires a lot of what’s called “active focus” - you have to engage directly with specific tasks and follow them through. In the tribal societies that we evolved to live in, humans spent at least as much time engaging in “passive focus” - the kind of focus that you give to things that you don’t have to engage with, like a nature scene. Research suggests that passive focus helps us to rest and restore our ability to engage in active focus. That means more energy that your employees can bring to their demanding jobs.

Temperature is another factor that is easy to forget about, but which has an important effect on productivity. There’s no way to please everyone - some people simply run hot or cold - but reaching an acceptable middle ground is important for preventing lost productivity.

You’re aiming for the comfortable middle, but in general, it is better for employees to be slightly too cold than too hot. When people are cold, their bodies tell them to move around in order to generate heat. This keeps people alert and focused. When people are too hot, their bodies do the opposite in order to avoid generating more heat, making them sluggish. It’s also worth noting that cold employees can put on sweaters - employees that are too hot can’t do much.

Some offices opt for more complicated temperature control systems to keep their employees happy and productive. Comfy, for example, lets each employee in a space indicate whether they are too hot, too cold, or comfortable, and adjusts the temperature based on the aggregate.

One of the most common causes of an inefficient workforce is poor indoor air quality. More specifically, it’s the concentration of carbon dioxide. In almost every busy office, CO2 levels sometimes reach well above normal levels, heading north of 1,000 parts per million in many cases. In a crowded meeting room, levels can get even higher.

Why is this an issue? Cognitive function in most people begins to decline at around 700 parts per million. The result is that people think slower, feel more drowsy, and make worse decisions. That dopey, sleepy feeling you get in meetings? It’s (probably) not just because the speaker is boring you to death. Other indoor air quality factors can also have a productivity impact. Sick building syndrome may result in additional absences, as may biological contaminants.

Modern buildings are beginning to install air quality sensors that detect the presence of CO2 and other indoor pollutants. They can then send a signal to the building automation system to open the vents and pull in fresh air. These systems are new, but evidence suggests that they pay for themselves in terms of recovered productivity.

Finally, you have comfort. While investing in the most expensive office chairs might seem like an appealingly simple solution, offering employees choices in how they work and small touches to make their work for comfortable are just as important.

One of the most valuable investments in ergonomics that modern companies are making is the sitting/standing desk. More affordable versions of this device come with a crank that allows for manual transitions between each state. Keep in mind that it is also essential to include a floor mat for comfortable standing work. Wrist rests for keyboards and mice, stands to keep computer monitors at the right height, and similar features are also appreciated.

Chances are, your employees work hard. Over time, neck and back pain, carpal tunnel, headaches, etc. add up, robbing them of productivity and job satisfaction. Investing in employees’ comfort is often just common sense.