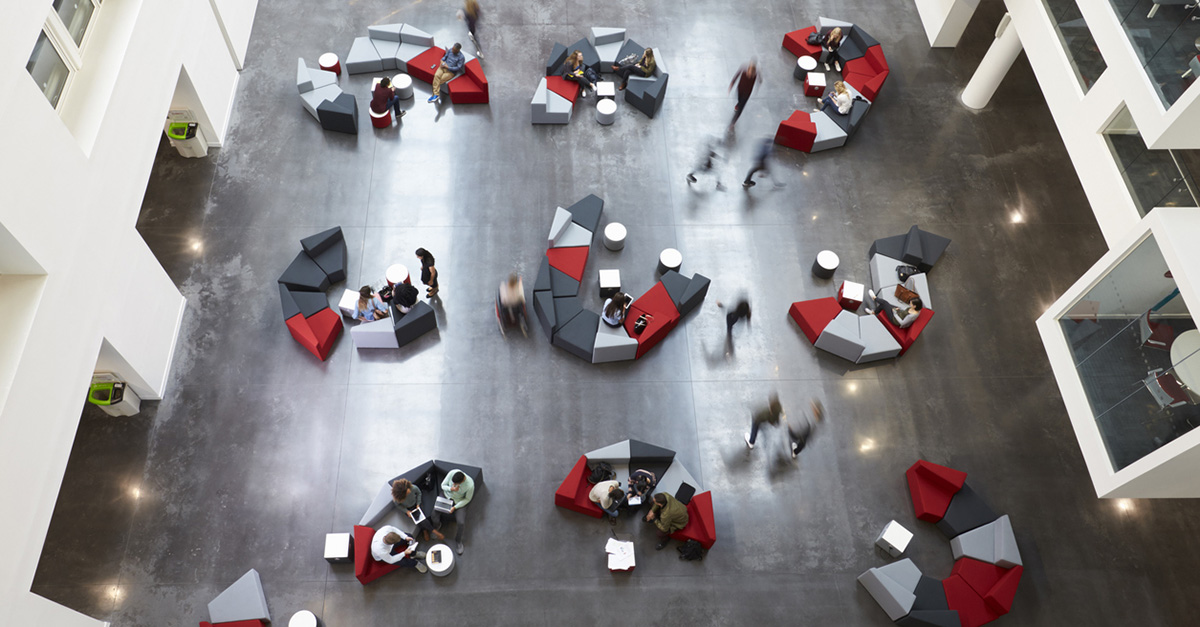 How An Idea From Bell Labs Is Improving Office Design Today

For most of the 20th century, the great house in American innovation was Bell Labs. The labs were born to solve a new class of problem, and as a result, something wholly new was born: a research laboratory that threw together engineers, theoretical physicists, materials scientists, manufacturers, and telephone pole climbers.

The problem they were brought together to solve - how to build a transcontinental telephone line - was sparked by AT&T president Theodore Vail’s commitment in 1909 to connect New York and California by phone. It was completed five years later, and by then the Bell Labs model had proven itself to be effective. Over the next century, researchers at the labs would invent the transistor, early solar power, information theory, lasers, radio astronomy, mobile phones, and microchips.

Without a doubt, part of Bell Labs’ success came from its knack for hiring the smartest person in the room at universities across the country. The true innovation, though, was throwing all of those smartest-people-in-the-room into the same rooms as each other again and again, until like a particle accelerator for smart people, they produced some of the most important breakthroughs of the modern age. We call the chance meetings and productive friendships (and rivalries) that this approach generates “creative collisions,” and it has proven itself to be one of the most effective means of creating an innovative, highly-motivated corporate culture.

In Jon Gertner’s deep dive into Bell Labs’ history, The Idea Factory, a lot of time is spent detailing the near-prescient pairings of experts made by research director Mervin Kelly and other influential managers. However, almost as many fruitful interactions described in the book can be traced to architectural features. Long, wide hallways that had to be traversed to navigate the building were included intentionally, so that chance encounters with colleagues and acquaintances were virtually unavoidable. As Gertner himself put it in a 2012 opinion piece for The New York Times, “a physicist on his way to lunch in the cafeteria was like a magnet rolling past iron filings.”

Following Bell Labs’ seminal example, offices around the world have used architecture and office design to encourage creative collisions among their workforces. Modern technology has made it possible to more easily track these collisions, and slowly a kind of science is emerging.

In 2012, Norwegian telecoms company Telenor decided to investigate the effects of inter-office communication. They convinced their employees to where sociometric badges for the duration of the experiment and identified three metrics: exploration, or interaction with people in other work groups; engagement, or interaction within a workgroup; and energy, the number of interactions overall. They found that a 10 percent increase in exploration by salespeople led to a 10 percent increase in sales. This led to a restructuring of the office coffee stations and cafeteria that increased sales by about $200 million.

Cornell Tech’s recently finished Roosevelt Island campus was designed specifically with collisions in mind. Kent Kleinman, the Gale and Ira Drukier Dean of Cornell University's College of Architecture, Art, and Planning who helped to develop the new campus, explained some of the features that were included to that end. Wide hallways like those at Bell Labs make it more likely that students and faculty will run into one another. River views and lots of natural light were included to encourage people to stop and interact. Classrooms are designed with moveable furniture and walls that can be written on to encourage movement and discussion.

Also included in the Roosevelt Island campus is The Bridge, an innovation center that will lease or provide office space to startups, established companies conducting research or incubating new acquisitions, and academic teams from Cornell Tech. Putting these different groups under the same roof is intended to aid the flow of information between different spheres. This is also similar to the Bell Labs approach: Kelly set up satellite offices for researchers in AT&T’s manufacturing plants so that scientists and factory workers could exchange thoughts.

Another organization working actively to foster creative collisions is Boston Consulting Group. The company’s new workplace at New York City’s 10 Hudson Yards was designed after careful consideration of the balance between “open” and “closed” spaces with an eye to maximizing productive collisions but maintaining opportunities for privacy. BCG employed Humanyze, the same company that conducted research for Telenor, to compare in a quantifiable way the effect that the new office was having on productivity. They identified a 19 percent increase in collisions during the study and a greater diversity of contacts between staff. The degrees of separation between functional practice groups in the building decreased by 18 percent, meaning that information became easier to spread internally.

Other factors that are positively associated with productivity also increased, like the number of quick interactions in open spaces (56 percent), time spent moving around during the work day (30 percent), and time spent in the office (15 percent) were also promising. In total, the collision coefficient tracked by BCG and Humanyze increased to 21.7 from the old office’s 18.2, a 19 percent change.

In its heyday, Bell Labs was responsible for bringing the future on faster. One of the most remarkable elements of its story is that scientists were given a free hand to approach problems in new and different ways. Often, the results of their research failed to solve the problem at hand, but instead found purchase solving another, unexpected problem. The invention of the creative collision model for design can’t compete with the transistor or information theory - not much can - but it continues to have an important effect on modern office design. Architects, office designers, and CRE professionals can thank the research titans of last century for an idea that is driving productivity and employee satisfaction today.