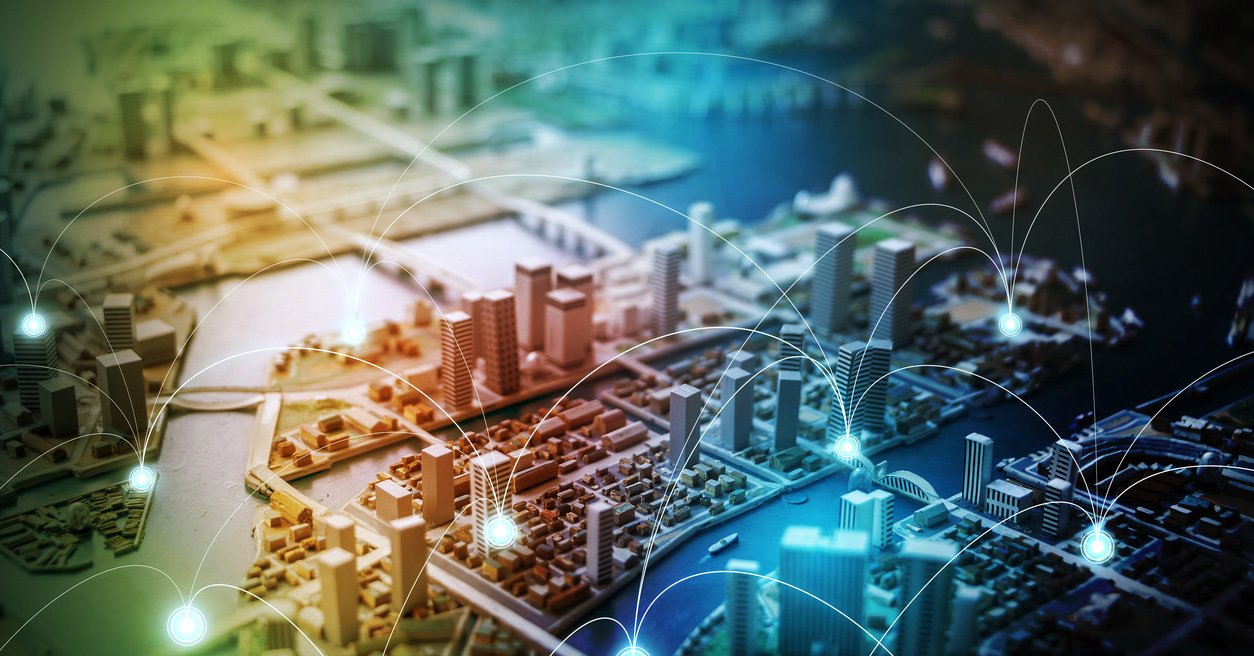 Answering IoT challenges in commercial real estate with the blockchain

As the internet continues its inexorable takeover of every aspect of our daily lives, more and more devices are being connected to it. We call this trend, which networks refrigerators, HVAC systems, and water meters alike, the ‘internet of things.’

There are a lot of advantages to using IoT. The Aquicore platform would be impossible without it. So would products like Nest, Fitbit, and Amazon Echo. However, with so many of the objects that we rely on being connected to the internet, there are important challenges on the horizon. Top of mind are the security needed to protect these devices and their users’ privacy, and the infrastructure required to handle the additional traffic they will produce.

Some experts think that the blockchain, the innovative infrastructure behind cryptocurrencies like Bitcoin, is the key to solving many of the challenges the internet of things will face as it grows.

What is the blockchain?

Andre DeCastro, founder and CEO of Blockchain of Things, Inc., defines the blockchain as, “a globally replicated, decentralized, ledger system.” It was designed to facilitate financial transactions between complete strangers online in the digital currency Bitcoin, and as a result, it makes use of features that eliminate the need for trust between parties.

Rather than keeping one central ledger of all transactions, they are stored in a ‘block’ that lists all recent transactions. Every block contains a link to the previous block, going back all the way to the first transactions carried out. That the entire database is public and copied all over the world is essential, DeCastro explained: By maintaining a globally replicated ledger of every transaction, it makes it nigh impossible for a malicious actor to alter it or disguise activity.

Another important feature is the cryptographic signature that accompanies each transaction. This feature, which is like a ‘fingerprint’ for every device or cluster, lets the receiver verify that the transaction has come from the authentic sender. This prevents what is sometimes known as a man-in-the-middle attack, whereby a malicious actor is able to intercept and alter messages as they are passed between the legitimate communicators.

These features are essential for protecting the legitimacy of a currency that, as of late January, is worth a combined $15 billion. They also may provide the architecture to ensure smooth operations for the future of the internet of things. It is important to point out that, while the blockchain is most frequently and famously used as a means for sending and receiving bitcoin and other cryptocurrencies, these currencies are just packets of data. As the underlying digital infrastructure for these transactions, the blockchain can be used to carry any packet of data.

There are three primary problems on the horizon for the internet of things for which experts see the blockchain as a potential solution. First is the limited capacity of a centralized, “server-client” model for dealing with the millions of connected devices slated to come online in the next several years.

The blockchain allows for direct communication between devices, cutting out the need for a central hub. Devices can easily and effectively authenticate traffic from their peers using each others’ cryptographic signatures. While this won’t be an effective solution in some circumstances, like those in which data needs to be collected in a central location, as is the case with Aquicore’s digital platform, it could significantly cut down on processing and storage power in situations that don’t. Some elements of building automation come to mind: A lighting system that uses partial natural light needs to monitor the level of light coming in and communicate with electric lights to adjust levels accordingly, for example, but there isn’t a compelling reason for that communication to travel through a central hub.

The prospect of overwhelmed servers dovetails with the next major issue: the cost of running and maintaining central servers. Even if we are able to build out the infrastructure needed to maintain the server-client model, the cost will become even greater than it is today. The worldwide cost of cloud computing was estimated at $70 billion in 2015 and is growing at a compound annual rate of 19.4 percent. By 2019, it is expected to reach $141 billion. As such, using technology like the blockchain to cut down on server demand, especially for IoT companies, will likely become an important part of business strategies.

This brings us to the final and most important element of IoT technology for which the blockchain may prove advantageous: security. A lot of ink has been spilled on the subject of IoT security because it is a serious issue. There are two sides to consider, the security of the information being transmitted by any given device and the security of the device itself.

It’s easy to see how data security is a significant issue for the internet of things. Connecting more devices and sensors to the internet means additional risks for breaches. Even data that doesn’t appear sensitive may be used to glean insights that could be put to malicious use - an IoT refrigerator that tracks its contents could reveal when its owner is out of town, for example. More sensitive data breaches, say, from a security camera, could expose companies to criminal, business, or legal risks.

With or without the blockchain, the obvious solution to this issue is to encrypt transmissions. This is relatively straightforward using the blockchain but could be accomplished through the traditional model. However, encryption would do nothing to protect the data being collected from a device that is itself compromised.

The risk of malicious actors gaining control of a device and using it for their own ends is already a serious concern. The nightmare scenario is that a device with the ability to control critical systems becomes compromised and is used for sabotage or vandalism. Other concerns involve compromised devices that leak otherwise encrypted data and devices being used for unrelated, malicious purposes.

This last problem is of particular concern in light of the massive distributed denial of service (DDoS) attack carried out in late October 2016. A DDoS attack involves using large numbers of compromised devices to spam a target website with nonsense requests. Once the server hosting the website is overwhelmed, it becomes unable to process legitimate requests. In October, IoT devices infected with the Mirai botnet malware were a major source of devices used to DDoS the servers of services like PayPal, Netflix, Twitter, and The New York Times.

Often, devices are most vulnerable to malicious code like Mirai through their update protocols. By making use of the blockchain’s cryptographic signatures, devices could authenticate the source of any updates and refuse data from unverified sources. Simply changing the username and password on IoT devices would have prevented the majority of devices from becoming compromised by Mirai, but as attacks become more sophisticated, some experts believe that the almost airtight security offered by the blockchain will become essential.

Why is IoT valuable for commercial real estate?

CRE professionals who operate or manage modern buildings may look at IoT with a degree of skepticism. It sounds an awful lot like the building management and automation technology that they have been using for years.

In principle, IoT technology isn’t that different from the BMS that many modern buildings are equipped with now. In practice, IoT companies are taking the existing trends of installing sensors and remote controls further and leveraging the information that comes out of them to create significant value.

To draw on an example in our niche, many buildings have access to interval data for their utility consumption that approximates their consumption for the previous day in 15-30 minute intervals. Far fewer make use of an IoT energy management system that pulls and analyzes consumption data in real time, normalizes against weather patterns, or helps building teams to adjust consumption to avoid peak load charges.

As IoT technology continues to develop, experts expect to see further improvements to building performance applications. Motion and occupancy sensors could help to fine-tune HVAC and lighting use in real time, cutting waste. Advanced analytics tools may even be able to draw insights from this data, allowing an automated system to behave predictively, instead of reactively.

Buildings with IoT-enabled equipment are able to monitor for problems and automatically call for a repair. Not only does this avoid downtime from system failures, it allows replacement schedules to be circumvented in cases where equipment lasts longer than expected. Companies like SOMAX are already working on this application.

From an asset manager’s point of view, there is research that suggests IoT may contribute to better CRE valuations. For example, by making use of utility consumption data, plumbing use, temperature settings, and occupancy sensors, asset managers can build a picture of how certain building features impact employee efficiency, which can then be baked into an asset’s value. These insights may also provide actionable information for other assets.

Finally, tenant-facing IoT applications are likely to become increasingly sought-after features. The most common application today, and probably the most basic, is in smartphone-controlled light bulbs. Other applications, like Comfy’s smart temperature control for offices or Robin’s automated conference room booking, are more involved ways of adding value for tenants.

As the internet of things continues to develop, there will doubtless be features and tools that find their way to becoming essential for competing in the commercial real estate industry. Some will find their way into the set of standard building management tools, others will become high-level asset management solutions, and still others will be sought-after amenities for tenants. For all of them, concerns over cost, feasibility, and security will need to be addressed. The blockchain may provide the solution or the blueprint for it.

Interested in learning more? CRE Tech Horizons: Infrastructure dives even deeper into how the blockchain will affect commercial real estate operations and transactions, examines the potential impact of drone delivery on retail, and looks at the effect that self-driving cars will have on the way our cities are organized.