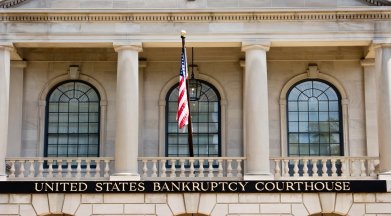 What you need to know about commercial tenant bankruptcy

The possibility of tenant bankruptcy is a reality that landlords may have to contend with at any time, but in light of the most recent crop of retail closures and bankruptcies, it’s more relevant than ever.

As frustrating as bankruptcy is for any creditor, those who know the details of how bankruptcy law affect them and their businesses will be the best positioned to protect their interests. Only by carefully following bankruptcy proceedings and vigorously advocating for their interests in court can landlords recover as much as possible of the money that they are owed.

General bankruptcy concepts to be aware of

Bankruptcy is a complicated legal area with lots of important legal issues to explore. The following four concepts are essential to be aware of; they will help you to explain what situation you are dealing with and which actions you must not take.

Chapter 7 bankruptcy involves the liquidation of the filer’s assets by an appointed trustee in order to cover as much of the filer’s debts as possible. Because it is typically reserved for more serious bankruptcies, this option often results in creditors getting the smallest returns on what they are owed, though there are some exceptions.

Under Chapter 11 of the bankruptcy law, filers retain control of their assets and restructure their businesses in order to continue operations to the benefit of all parties involved. The intention is that creditors will be best served by taking a mutually agreed-upon haircut on their outstanding loans and allowing the business to continue operating.

Debts that a tenant incurs before filing for bankruptcy are called “pre-petition” claims, while those incurred after are “post-petition” claims. This is especially important for landlords, because post-petition claims take priority over almost all pre-petition claims. In the context of rent, the rental payments owed by a bankrupt tenant who continues to occupy the space will almost always get paid, whereas there is often a good chance that pre-petition rent won’t be.

By law, all efforts to collect unpaid debt must cease as soon as your tenant files for bankruptcy. This ensures that the tenant’s remaining assets can be utilized or liquidated for distribution fairly among all creditors. Without express permission from the court, it is illegal to make any effort to collect on the tenant’s unpaid debts, although co-signers are generally fair game.

These are a little tricky. Preference rules are designed to prevent a business or individual from showing a personal preference for one or more creditors over the rest by paying down debts before filing for bankruptcy. Generally, if a tenant pays you for a debt that is more than 30 days overdue and then files for bankruptcy within the next 90 days, that payment could be considered a preference, and the court can claw it back from you. Since you don’t necessarily know whether bankruptcy is going to be declared, this can make collecting overdue payment from a tenant risky.

How do leases behave during bankruptcy proceedings?

The most important knowledge for landlords to have during a tenant bankruptcy is how leases behave in this context. A misunderstanding of bankruptcy proceedings or protections causes landlords to unnecessarily expose themselves to risk every day.

First, if a lease is terminated before bankruptcy is declared, the tenant does not have the right to continue the lease and can therefore be evicted relatively easily, assuming that rent is not being paid. If the lease is still in effect, however, it is much more complicated. While many commercial leases contain clauses that consider a bankruptcy as a breach of the lease, these are almost uniformly unenforceable. It is illegal to terminate a lease or make its requirements more onerous because of a bankruptcy.

Tenants with active leases when they file for bankruptcy have 60 days to assume or reject their lease, though they may ask the court for an extension of this period.

It is important that landlords not assume that a Chapter 7 bankruptcy implies a rejection of the lease or that Chapter 11 implies an assumption of the lease. Both can go either way. Under Chapter 7, it is possible that the trustee will see the lease as a valuable asset and decide to sublease the property or that the established business at that location will be sold as a whole, meaning that the lease will pass to the buyer. Under Chapter 11, the tenant may choose to close the location and reject the lease as a part of its restructuring process.

If the lease is assumed, the tenant (old or new) must agree to the terms of the lease. This may include any delinquent rent, allowing the landlord to recover all or part of its pre-petition claims. Generally, delinquent rent must be paid within a few months.

Sadly, it is more common that the lease is rejected, either before the end of the 60-day period or automatically when the time expires. Should a tenant reject the lease, bankruptcy courts will typically provide an immediate eviction order upon request, which is much faster than other options. However, losses from a rejection of the lease are unsecured claims and are some of the lowest class of claim, like pre-petition unpaid rent.

Alternately, the landlord and tenant may choose to sign a new lease. While it typically involves taking a haircut on unpaid rent, this can be one of the most effective ways of maximizing the amount that landlords do get back in Chapter 11.

What else should landlords know?

In many ways, landlords are some of the strongest classes of creditors, especially of the tenant continues to occupy the space. There are situations in which landlords can get relief from the automatic stay and others in which the landlord can get the tenant removed early. With the correct legal advice, landlords often recover a significant portion of the debts they hold.

To do so, however, it is important that landlords pay careful attention to the filing deadlines and dates of key hearings so that they or their representative can vigorously advocate for their rights. Without this action, they can easily forfeit some or all of the money they are owed by default.

Tenant bankruptcies are complicated and almost always involve some loss, but with the right actions, landlords don’t need to lose their shirts.

As always, we want to remind you that this is an expression of the best of our knowledge and does not constitute legal advice. We recommend that you consult with competent legal counsel.