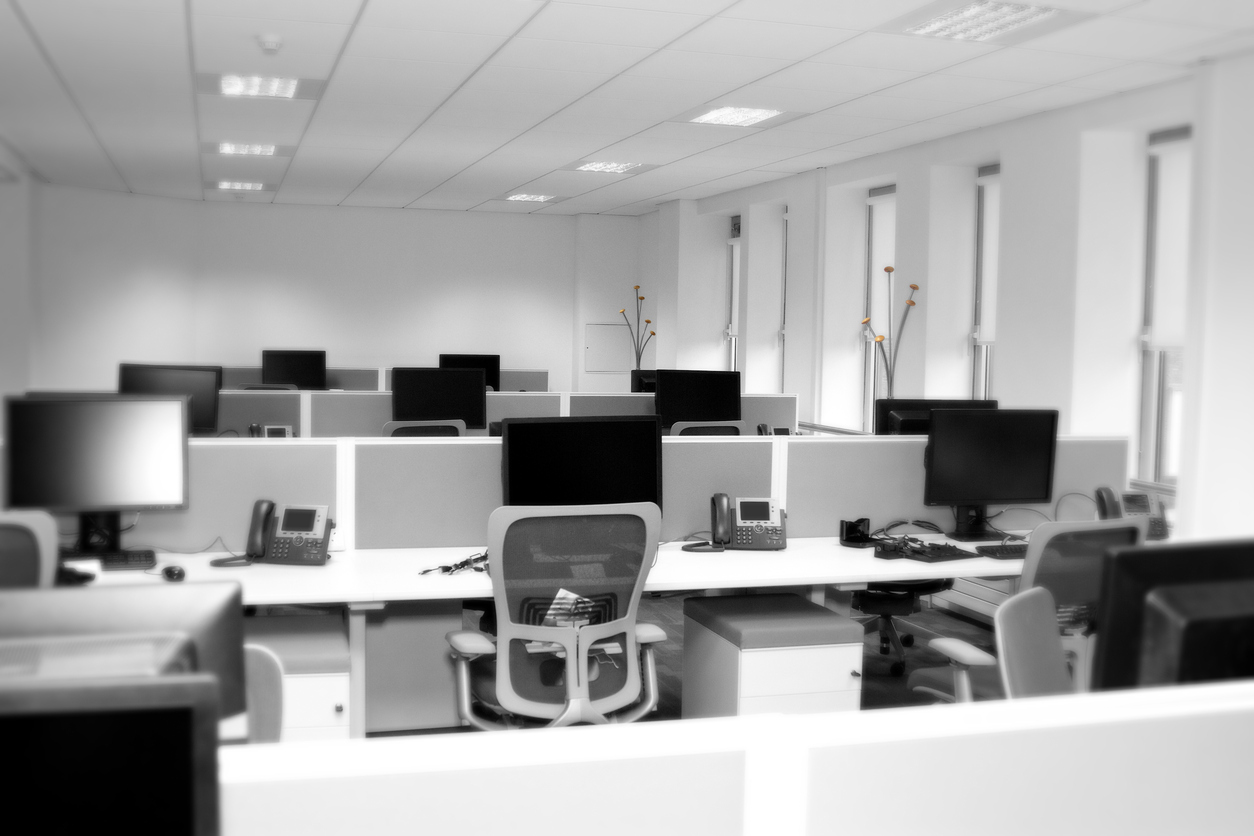 Competing Views for the Future of the American Office

They say that trends come in circles. No one knew that better than the late Robert Propst, who invented the cubicle to set workers free.

You’re already dubious. That’s ok. You’d need a long memory to know that the “modern” open concept office is actually a throwback to the 1950s and 60s, when offices consisted of rows upon rows of junior employees at desks packed neatly together. Fans of Mad Men will recognize the bullpen of desks facing forward, classroom style.

Propst felt that this was an inefficient travesty, and as an inventor, he set about coming up with an alternative. His solution was the “Action Office,” an elegant, 1960s-chic set of furniture and dividing walls meant to give office workers private spaces that encouraged productivity, comfort, and blood flow. Pieces were supported with bright aluminum and chrome and rendered in bright technicolor greens, blues, and yellows. It was all very Star Trek.

Then reality hit. Propst’s inventions were a hit in theory - they received rave reviews from news and architectural publications. Among business leaders, who were loathe to pay for the (fairly expensive) system for their lower level employees, it found less success. Propst went back to the drawing board and came up with the Action Office II, a more affordable, less extravagant system. This began to reach the right buyers, but even more successful were Propst’s competitors, who quickly understood what employers were really looking for. The laudable goals that Propst started with were abandoned in favor of affordability and raw efficiency, birthing the modern cubicle.

Like Otto Hahn, who discovered and then campaigned against nuclear fission and Mikhail Kalashnikov, who famously wished he had invented a lawnmower, Propst had soured on his most famous invention by his latter years. In a 1998 interview two years before his death, Propst noted that an estimated 40 million Americans had used some variant of the Action Office, but acknowledged that their experiences had not all been positive.

“Not all organizations are intelligent and progressive,” Propst told Metropolis magazine. “Lots are run by crass people who can take the same kind of equipment and create hellholes.”

Where Are We Going?

Fast forward to the mid-2000s and the open office is back in vogue. By the end of the 20th century, workers were so sick of grey tackboard that they would have jumped at nearly any alternative. Employees tore down the cubicle dividers, but today, some workers are starting to ask whether they might have forgotten why they were put up in the first place.

In fact, whether open offices were a step in the right direction or a step backward is the subject of heated debate. Their proponents see them as fonts of creativity and collaboration. They’ve been lauded as the way “millennials” like to work, and they’re a demonstrably more social way to work. Those against open offices often see them as a cynical cost-cutting move dressed up as a perk. They argue that the lack of privacy is actually a drag on productivity, as are the constant interruptions inherent in sharing elbow space with several of your coworkers. They also claim (not without evidence) that working in such close proximity results in more sick days taken per employee.

It shouldn’t be that surprising that people are bitterly divided over the issue. After all, most people spend over half of their waking hours in the office during the week. Depending on where they stand on the issue, some employers are doubling down on the open plan office while others are striking out in a new direction. Others still are pioneering the third option - remote work.

Startup employees in an open office.[/caption]

In Menlo Park, California, Facebook’s most recent headquarters was known, at least briefly, as the largest open plan office in the world. Its 430,000 square feet are interrupted by virtually no interior walls whatsoever - no cubicles, no corner offices, no divisions between teams, nothing. The inside is so ubiquitous that Facebook had to install a custom wayfinder system to help employees find one another’s desks.

Even more recently, Apple unveiled its almost ostentatiously large UFO-style headquarters with a similar office plan. At 2.8 million square feet, the building will house up to 12,000 employees, the vast majority of which will be in an open office environment. With less room devoted to private offices, there’s ample room for the new building’s orchard and 100,000 square foot gym. There’s even a meadow and a pond.

There’s trouble in paradise, though. According to Jon Gruber, a blogger, podcaster, and generally notable Apple follower, several employees have expressed serious dissatisfaction at the prospect of giving up their private offices. If Gruber’s report is to be believed, one vice president convinced the company to build his group its own building apart from the new campus, and several other employees are thinking about quitting in response to the new layout.

“Judging from the private feedback I’ve gotten from some Apple employees, I’m 100 percent certain there’s going to be some degree of attrition based on the open floor plans,” said Gruber.

A lounge is great for impromptu meetings and light work.[/caption]

The collaborative benefits of an open office for employees and the cost-saving benefits for employers seem to be too great to give up for most modern companies, so the question becomes how best to mitigate the downsides. Increasingly, employers are opting for a mixed approach, where workers are free to drift between private, sound-proof offices, communal lounges, coffee bars, and wide open bullpens.

Some proponents of this layout feel that the mixed office is a natural product of changing technology. Before laptop computers become common in the workplace, employees’ work was tied to their desks. With laptops becoming more and more common, though, employees can work anywhere in the building. It makes sense to invest in a variety of comfortable environments for employees to work in, especially in industries where talent is difficult to come by.

There is some danger on the horizon with this approach as well, though. As employers devote more space and resources to alternative spaces, the primary desk environment is deprioritized. Companies can save considerable sums by reducing the space they use per employee, and some designers have expressed concern that it's a matter of time before employers going through a downturn see the mixed office plan as a means of trimming off precious square feet. The result could be an uncomfortably cramped space where employees have to fight for adequate workspace.

Employees enjoy remote work options, but evidence is mixed as to whether it makes them more productive.[/caption]

The ultimate way for employers to cut down on office space is to let their employees work remotely. From IBM’s first experiment with five remote workers in 1979 to today, with an estimated 43 percent of employees working remotely at least some of the time, remote work has become a major force in shaping the landscape of modern work.

The question of where remote employees work varies wildly. Some of it happens in underwear at the kitchen table over a sleepy cup of coffee, some of it happens at wifi-enabled coffee shops where the price of admission is a $5 latte every few hours, and some of it happens in suspiciously chipper coworking spaces with inspirational phrases on the walls and beer on tap. That working from home is becoming a major feature of the American experience is especially clear in light of the massive growth of the latter category. Over the last seven years, coworking industry whale WeWork has grown from nothing grown into a $20 billion company without showing any signs of slowing.

Curiously, though, IBM recently became the latest in a string of high-profile companies to call their remote workers back into the headquarters. As recently as 2009, the company was boasting about its extremely distributed structure, claiming that 40 percent of its 386,000 employees had no permanent office, so this marks a serious turnaround in policy. It’s possible that IBM is responding to new research that suggests that, while individual productivity may increase when employees are allowed to work from home, group productivity suffers because of communications hurdles.

Of course, there isn’t any guarantee that one specific answer to the question, “what will the office of the future look like” will emerge. Offices ten or twenty years from now might be wildly diverse, be a mixture of the above elements, or be completely different from any of the three currently competing models in response to some new innovation.