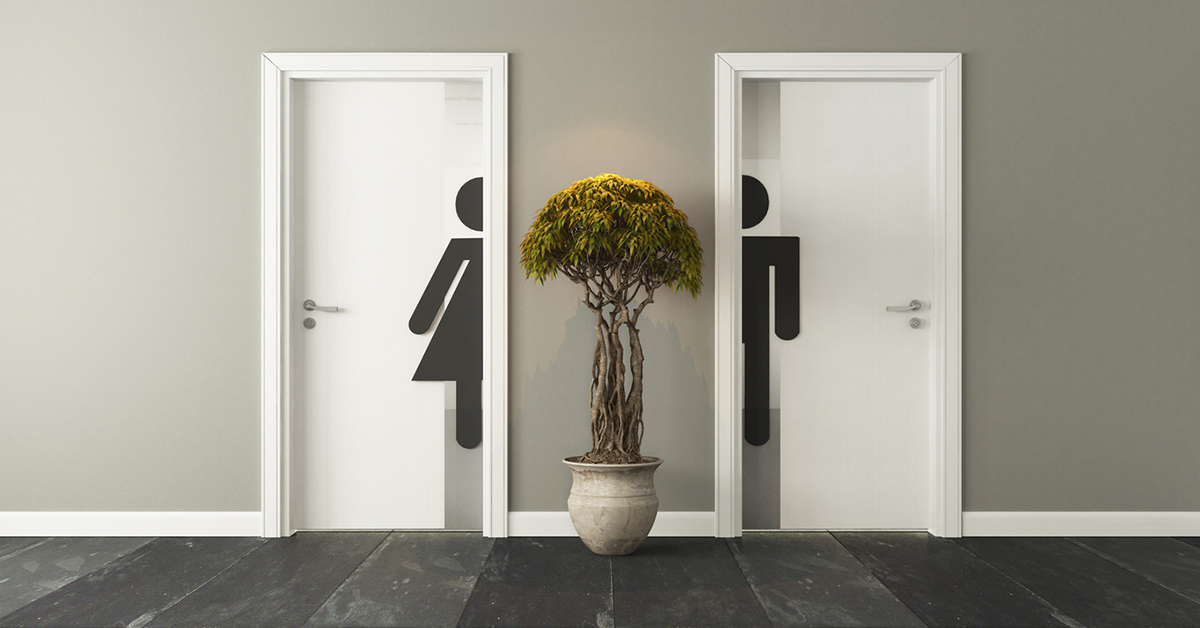 What do gender neutral bathrooms mean for building owners?

The public debate over gendered bathrooms has already ebbed out of the public eye in light of louder partisan disagreements, but in California progress is quietly being made to promote unisex bathrooms in commercial spaces. A law went into effect a few months ago requiring building owners in the state with single-use (as opposed to multi-stall) bathrooms to make those facilities gender neutral.

Should laws like the one in California become the norm across the nation or consumer pressure build for the same outcome regardless of the law, commercial real estate operators around the country will be looking to the experiences of their California colleagues to know what to expect. So far, it looks like they won’t have to expect very much - even so, let’s examine what this might look like.

Potential concerns for the industry

Opponents of restroom integration argue that guests will feel uncomfortable sharing facilities with the opposite sex or that they might even increase the potential for sexual assault. If this danger proved to be real, or even if customers simply felt uncomfortable, it might constitute a business concern for those owners who had chosen to integrate, whether those feelings are based in fact or not.

While there have been no reported cases of transgender individuals committing assaults in bathrooms - a canard sometimes propagated by opponents of unisex bathrooms - it is essential that everyone feel safe. (This is, in fact, especially important for transgendered people, who frequently face harassment and assault for using single sex bathrooms themselves.) Luckily, the problems that people anticipate with unisex bathrooms so far do not seem to have materialized.

“We expected all kinds of feedback, but it has just been like it’s supposed to be - people just going to the bathroom, Ed Decker, the founder and artistic director of the New Conservatory Theater Center, an entertainment venue that integrated its multi-stalled bathrooms almost two years ago, told the San Francisco Business Journal. “We’re all just going to the bathroom here.”

There are also a number of steps that building owners can take to make their patrons feel more comfortable with the new situation. The California law only applies to single-use restrooms, so multi-stall bathrooms may still be limited to one gender. Building owners can, and are, choosing to keep single gender, multi-stall bathrooms or replace them with unisex single-use bathrooms. The Human Rights Campaign, the biggest U.S. LGBTQ rights organization, is in favor of this move, suggesting on its website that employers consider their guests’ and employees’ desire for privacy. It also suggests that employers who do choose to integrate multi-stall bathrooms enhance privacy features by using stall walls and doors that extend from floor to ceiling, for example.

On the other side of this, it’s worth discussing what commercial real estate owners have to gain by integrating their commodes. There are some inherent structural advantages to having more bathrooms that everyone can access, but there is also the potential for branding value for early movers.

The structural advantages are straightforward. Everyone has found themselves waiting in line for the bathroom while the other gender’s bathroom is frustratingly, inefficiently empty. A few brave souls might cross enemy lines, but the majority stand and wait. Integrating bathrooms eliminates this problem neatly.

From a brand perspective, there is clear evidence that providing unisex bathrooms is in line with the values of younger consumers and the tech companies that court them.

You don’t have to look any further than North Carolina to see the results of a move in the wrong direction. The state enacted a short-lived law restricting public bathrooms to users’ birth gender and was immediately faced with massive backlash in the form of private businesses choosing not to do business in the state. Politifact estimates that the law cost the state between $450 million and $630 million in the year it was in place.

And on the other hand, it seems that millennials are willing to reward businesses in buildings that do provide unisex bathrooms. Local business review site Yelp rolled out a new feature recently that allows users to search for businesses that offer unisex bathrooms. Will Cole, a product manager for the company, told Business Times that 134,000 and rising businesses are now listed in the category, and that there had been an overwhelmingly positive response to the feature.

How did restrooms get separated in the first place?

When something has been a certain way for your entire life, it's easy not to question it or to imagine that it has always been so. Gender specific bathrooms predate living memory, but as many people are surprised to learn, not by much.

In fact, the first place bathrooms were legally split between genders in America was in Massachusetts in the late 19th century. Another 40 states had followed suit by 1920.

Why were bathrooms split? According to Terry Kogan writing for The Guardian, the decision was rooted in the rather sexist 19th century “separate spheres” ideology, which dictated that men belonged in the professional sphere of public life and women belonged in the domestic sphere of the home. This arrangement persisted from the beginning of the 19th century, when production shifted from the home to factories, creating the professional sphere in the first place, to somewhere in the middle of that century, when women began leaving the home for professional and public lives of their own.

By the late 19th century, the remnants of the separate spheres ideology manifested themselves differently - instead of insisting that women stay in the home, America turned itself to creating separate spheres in public life. The 19th century saw the propagation of train cars, parlor spaces, and, yes, bathrooms exclusively for women and sometimes their escorts.

The notions behind separate spaces for women - that they were inherently weaker and needed protection in the world of men - would immediately be rebuked if it were to be expressed that way now, as Kogan notes. And yet, legislators and opponents of trans rights in the 19 states currently considering a law similar to the ill fated one enacted in North Carolina are couching their arguments in language that is remarkably similar. Several have raised the specter of trans women sneaking into bathrooms to commit sexual assault - again, no solid evidence has emerged to support that claim.

Will unisex multi-stall bathrooms become the norm as the younger generation grows up and the trans rights movement progresses? It’s difficult to tell. As of right now, though, it’s difficult to see a good reason for businesses and building owners to delay making their single use bathrooms unisex.