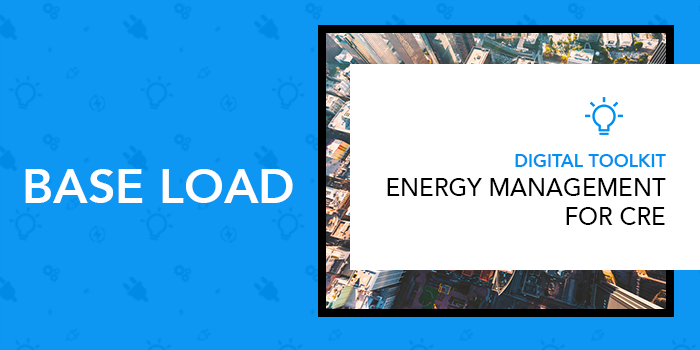 What is Base Load?

Base load refers to the rate of electrical consumption that occurs when a property is unoccupied, generally at night. Consumption factors that affect it include things like emergency lights, water pumps, parking lights, and HVAC systems that continue running even when no one is using the building.

The average price of one kWh in the U.S. is 13.19 cents. There are 8,760 hours in a non-leap year, meaning that each kW of base load costs roughly $1,155 per year. By contrast, each kW of electric load during normal operating hours costs closer to $330 per year. This is because commercial and government buildings spend almost three-fourths of the time unoccupied. As a result, base load accounts for more than half of all electrical consumption in most buildings.

With this in mind, it’s easy to see how a sensible business case can be made for cutting a commercial space’s base load. What’s the point in spending money on an empty building?

Get a pocket dictionary with this term and more when you download our digital toolkit: Energy Management for Commercial Real Estate.

How to reduce base load

The first step to cutting base load is identifying where your energy is going. Every building is a snowflake, but there are a few usual suspects to look at first.

Lighting is a common culprit, especially in buildings that don’t have central control over lighting through a building automation system. Energy going to lights left on overnight quickly adds up and makes for expensive electricity bills.

Emergency and parking lights need to be left on, but there is room for savings here, too. Compact fluorescent light bulbs and LEDs are significantly more energy efficient than legacy lighting. They also last longer, even relative to their higher price tag, making them an easy upgrade to justify.

HVAC systems are another major offender. While it’s uncommon to find building teams that leave their HVAC system running all night, it is common to find that teams are turning on their systems too early or not turning systems down far enough down at night. With the right tools, there is almost always more fine-tuning that can be done to trim unnecessary heating and cooling.

The efficiency of an HVAC unit is also worth considering. Building HVAC equipment is expensive, but when it comes time to replace a system at the end of its natural lifetime, it frequently makes sense to invest in a high-efficiency unit.

Further savings in this area can be found by investing in factors that better retain treated air. This could mean reducing leaks in a building’s ventilation system or investing in the building’s thermal envelope.

Finally, plug loads make up a large portion of almost every building’s base load. Some of this comes from “vampire devices” - devices that draw electricity even when they are ostensibly powered off - and some comes from devices that are simply left on.

In most cases, it is difficult for building teams to directly affect consumption from plug loads. The most effective strategy is often to engage tenants. Energy efficiency campaigns may help to motivate tenants to cut plug loads for moral reasons, but it is often more effective to simply submeter tenant spaces and bill them based on their actual consumption. This allows landlords to recover their full outlay on energy used in tenant spaces and provides a direct financial incentive for tenants to reduce their consumption.

Brush up on other energy management basics: