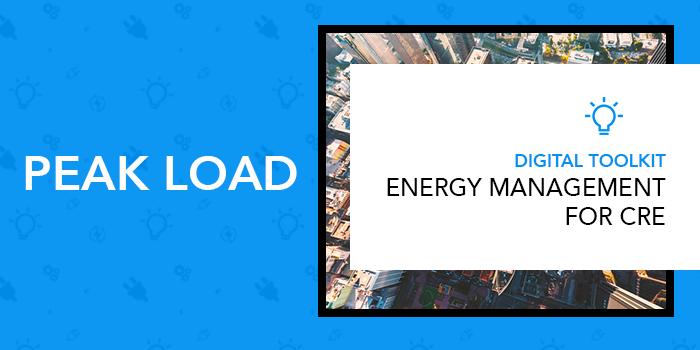 What is Peak Load?

Peak load is the highest amount of energy that a consumer draws from the grid in a set period of time.

Understanding peak load is essential for any commercial energy management strategy because it is used to determine a part of your building’s energy bill. Many electric utilities charge customers for the peak load in addition to their consumption.

To understand why, let’s dive into what a building’s daily electricity consumption look like and what it means to energy companies.

What is a load curve?

Commercial buildings use a lot more energy during the day. This makes sense: No one is around to use energy for things like lights and computers at night, and HVAC systems can be powered down because rooms don’t need to be heated or cooled.

The ideal commercial building’s load curve looks kind of like a top hat:

As you can see, the building uses very little energy between about 8:30 pm and 4:00 am. That’s about what we’d expect; after all, no one should be in the building. The base load accounts for things that need to run all night, like refrigerators, emergency lights, and minimal heat in the winter to keep pipes from freezing.

The occupied load should be roughly flat in the ideal commercial building. Once everything is turned on, there is relatively little change throughout the day. In this ideal building, the peak load will represent a local high, but shouldn’t be much higher than the average for the occupied load.

Get a pocket dictionary with this term and more when you download our digital toolkit: Energy Management for Commercial Real Estate.

Startup and shutdown are fairly similar, but it is important to note that startup is staggered out over a longer time period than shutdown. This is partly to heat up the building before people arrive and partly to avoid the high load caused by turning equipment on.

When a piece of equipment is turned on, it uses between 300% and 600% of its nameplate current for a few seconds. If a building turns on all of its equipment at once, it can cause a substantial peak.

Because peak load is used to determine a building’s energy bill, it is important to avoid this by staggering turn on times, as shown below.

Staggering the times when your building turns on its equipment helps to keep the startup line smooth. Buildings that don’t stagger and simply turn everything on at the same time end up with load curves that look like this:

That one peak around 7:00 am? Even if the building only demanded that level of energy for a brief moment, it is used to set the peak load charge on the building’s bill. Under some billing schemes, this rate may be assessed based on a monthly, quarterly, or even annual peak.

That means there’s a pretty serious motivation to avoid unnecessary peaks in your building’s energy demand.

Why do utilities set rates based on peak demand?

Think about the graph that utility companies have. Instead of a load curve for one building, they have a curve that accounts for all of the buildings for which they are supplying power.

To illustrate this point, imagine a fictional utility company that serves only five buildings. Each of those buildings has an identical load curve that looks like the half-Batman graph above.

Now, no two buildings have load curves that are exactly alike, but start up and other high-demand times tend to come around the same time of day.

Energy is extremely difficult to store efficiently, and it is not always possible to predict when demand will spike. This means that utilities generally have to be ready to provide enough energy for their customers’ peak demands, whenever they might come.

This is why electricity bills include charges peak load as well as actual use: They have to be able to charge for the cost of providing the service. Their customers may not need access to peak load capacity at all times, but the utility has to be ready to provide that capacity when they do need it.

Engineers in buildings equipped with energy management systems can see their buildings’ energy use in real time or at a brief delay and use this information to plan things like equipment turn on times in order to minimize unnecessary energy use and peak load. This lets utility companies reduce their total output, which in turn reduces the building’s utility costs and carbon footprint.

Brush up on other energy management basics: